Drought resistance has been one of the added benefits of growing Goliath forage rape in the Waikato recently.

Eric and Rhonda Bonenkamp are milking 266 cows on a 70 ha milking platform at Orini, north of Hamilton. They are in their ninth season sharemilking on this property.
The farm soil type is consolidated peat over a sandy loam. The operation is mainly all grass farming with summer forage crops of Barkant® turnips then Goliath forage rape. “The brassica crop suits our farming practice with a stocking rate of 3.8 cows per ha. We graze the turnips first then the rape,” says Eric. “Each has its own advantages but the main thing about the rape is the drought resistance, which has been very beneficial in the past two summers.”

This year the turnips were grazed from the first of February (for 30 days) with the rape being grazed from early March and then the cows went back onto grass silage by mid-April. Grass silage and palm kernel were fed to keep them going through the drought.

“It’s the second drought in a row but the rape keeps growing because it’s a deep-rooted crop. That’s why we’ve planted it. In the 2008 drought we had two paddocks of turnips but by the time we got to the second paddock, it was nearly had it. We had to search for something else. We saw the rape crop and when we sowed it in 2012, that summer turned into a drought too.”

The rape crop has been fine-tuned this year and has improved from a yield of 10 tonnes DM/ha last year to 16.5 tDM/ha this year thanks to “more nitrogen and spraying for aphids more often." Urea was applied at a rate of 300 kg/ha over four applications in rain conditions to prevent urea burn on leaf. The crop was sprayed at a 21 day interval with insecticide.

“This season was particularly bad for aphids – spraying every 21 days kept them under control,” says Eric.
The quality of the rape, despite the conditions, also had a positive effect on production. “Both seasons we noticed the rape also had milk production gains when the cows went onto the rape and the same drop when they came off the crop. They went onto good quality silage with the same kilograms of dry matter a day but the quality of the rape is such that their production still had a noticeable drop when they came off the crop.” 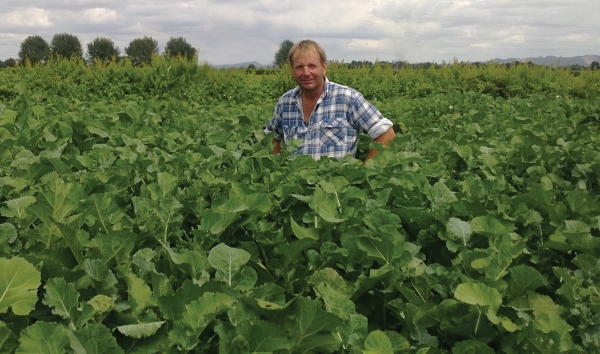 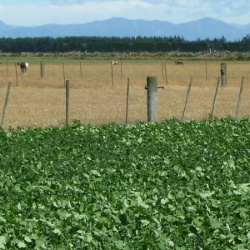