PGG Wrightson Technical Field Representative, Mark Jones, is a big fan of Pallaton Raphno® as he has seen first-hand the results it can provide for his customers. Mark says the drought tolerance aspect of Pallaton and its ability to recover quickly suits Dannevirke, where Mark is based, which can be summer dry.

This past spring, conversations with farmers were about finding the right crop to accommodate the lambs that were going to be on the ground following a good lambing in the area; and give farmers the ability to finish their lambs and take advantage of the scheduled prices. Mark’s customer, Greg Smith, who farms at Hirawai Station, has used Pallaton again this season after being impressed with the ability of the crop to perform in the dry and recover quickly after grazing. “Last year, we had 11 hectares of which we were able to graze 2,500 lambs over five grazings, including in the winter.” Greg managed the crop exceptionally well. At times he thought he had overgrazed it, but was impressed with how well and how quickly it was able to recover.

The start of 2019 has been dry for Hirawai Station, but Greg is pleased with the crop and animal performance on this year’s Pallaton crop so far. The crop is stocked at an average of 90 lambs per ha, and lambs started grazing the crop when it was around knee height. Local PGG Wrightson Seeds Sales Agronomist, Paul Greenbank says, “grazing at ‘knee height’ as Greg has done provides the best opportunity to maximise feed quality and increase utilisation and regrowth potential of Pallaton. This encourages more leaf and petiole, which helps maintain the quality of the crop for the lambs”.

After grazing over summer and autumn, the opportunity to carry Pallaton through to the winter for grazing is something that Greg will utilise again this season.

David and Louise Wightman are farming in South Otago on a 230 hectare sheep farm. Previously they have been sowing leafy turnip for their summer feed requirements, last year planting Pacer. Last year their PGG Wrightson Techinical Field Representative, Kevin Thomson of Balclutha, provided them with Pallaton Raphno® seed to try after he won this at a training day. Kevin said “I provided the seed to David and Louise as I have a number of farmers that are growing Pallaton who have really benefited from the multiple grazings. Pallaton provides farmers with flexibility due to its multi-graze, multi-use qualities.” Seven hectares of Pallaton was spring sown in late October 2018 and the first grazing occurred late December. They have rotationally grazed approximately 250 lambs across two paddocks. David and Louise followed best practice grazing management for Pallaton by not letting the crop get above knee-height between grazings. The first grazing they let the lambs graze the crop very hard, which didn’t affect Pallaton’s re-growth potential. In February 2019 they had completed three rounds of grazing and were starting to think about shutting the paddocks up to carry through for winter feed. David says “we are happy with how the Pallaton has performed and have learnt a lot about it and how to manage it in the future. Unlike leafy turnip, Pallaton can provide us with not just our summer feed but also winter feed as a 12-month option.” Over winter David and Louise are planning on putting their hoggets on the Pallaton, as they expect the hoggets will do better on it, versus on traditional swedes that they also sow. Regarding management of the Pallaton crop, they pre-emerge sprayed with Ombre, with the only real issue they have had being thistles which they are addressing this autumn. There have been no insect issues with their crop and they planned to add urea to the crop in late February for generating winter feed. David and Louise are planning to grow Pallaton again next season. 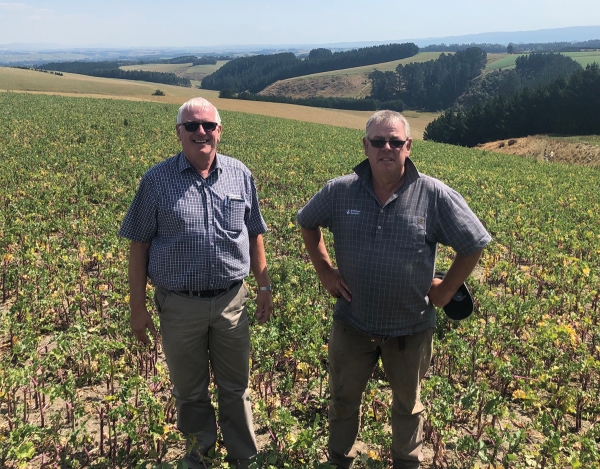 Smedley Station is located in Tikokino, Hawke’s Bay, spanning 5,500 hectares. Smedley farm sheep, beef and deer as a breeding and finishing operation, including velvet production. The 2019/20 season is the third consecutive season they have used Pallaton Raphno®. The decision to plant Pallaton was made to enhance their lamb finishing operation as well as safe guarding their farm system against possible drought. They are impressed with the drought tolerance of Pallaton as it can persist and regrow in dry summers. Smedley Station have integrated 140 hectares this past year into their farm system, alongside ryegrass pasture and high-performance crops including plantain, lucerne and chicory. Pallaton provides them with summer grazing with the added benefit of winter feed as a 12-month option. The multi-graze, multi-use qualities have led them to rotationally graze lambs in summer, followed by replacement hoggets, in-lamb ewe hoggets, deer and bulls in winter.

This year, Pallaton has enabled Smedley Station to finish their lambs, while taking advantage of high stocking rates as well as sustaining animal performance over an extremely dry summer. To ensure the crop was ready to graze with early weaned lambs, the crop was sown as early as possible and rotationally grazed. Stocking rates were higher on Pallaton compared to other forage crops and were reassessed between grazing’s to ensure continued animal growth and crop regrowth.

Business Manager, Rob Evans, is impressed with the crop and animal performance on this year’s Pallaton. Lambs achieved up to 300 grams liveweight gain per day, Rob was very pleased with the final carcass weight dressing percentages, ranging between 46-49% per head over the grazing period.

They have followed the best practice grazing management guidelines by using the summer grazing indicator cone and not allowing the crop to get above knee-height between grazings. Local PGG Wrightson Seeds Sales Agronomist, Paul Greenbank says, “grazing at the cone’s reflector strip provides the best opportunity to maximise feed quality, increase utilisation and regrowth potential of Pallaton Raphno®. This encourages more leaf and petiole growth, which helps maintain the quality for lamb liveweight gain.”

Smedley Station was one of the first properties to use Pallaton since its release 3 years ago. Smedley have continued to increase the area grown on farm, as they see a suitable fit for Pallaton within their farm system. This past season they grazed the crop to its optimum standard; the Pallaton cone grazing indicator has been a useful tool to ensure the crop is grazed at the right time. Rob and the team have gained the rewards of exceptional liveweight gain, carcass weight yields as well as quality and regrowth of the crop. Rob says, “this year our team have done a great job with grazing management and we’re looking to utilise Pallaton Raphno® again next season.” 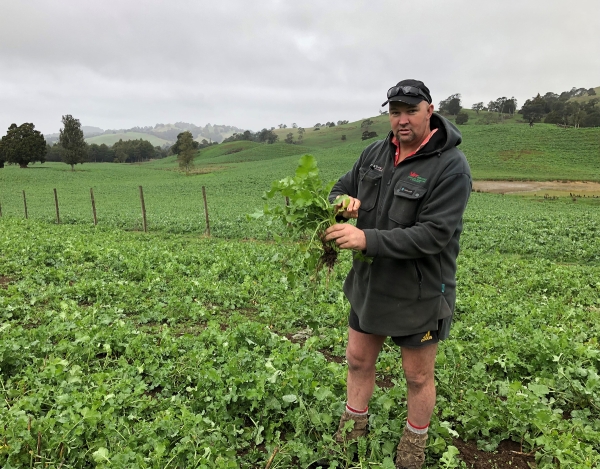 Business Manager, Rob Evans, in a paddock of Pallaton Raphno® at Smedley Station